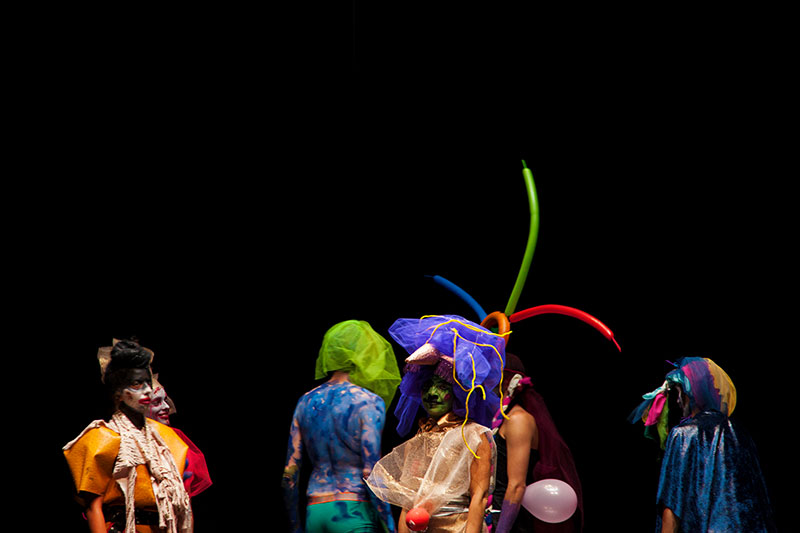 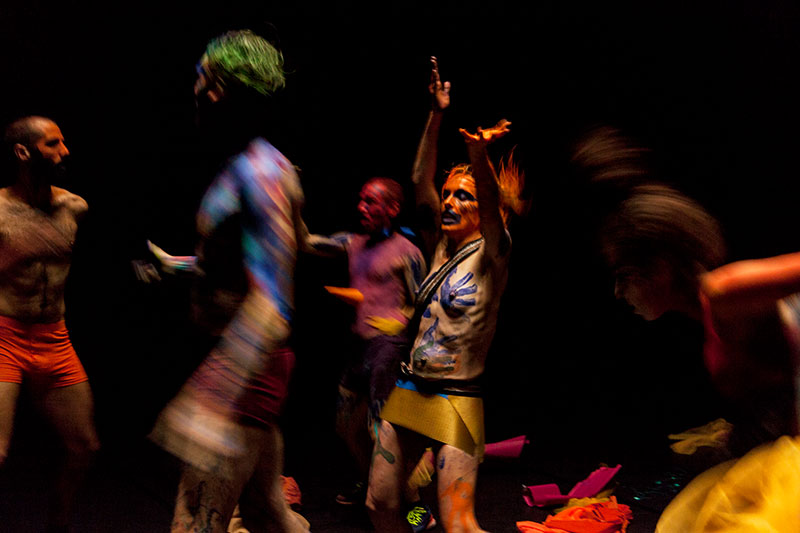 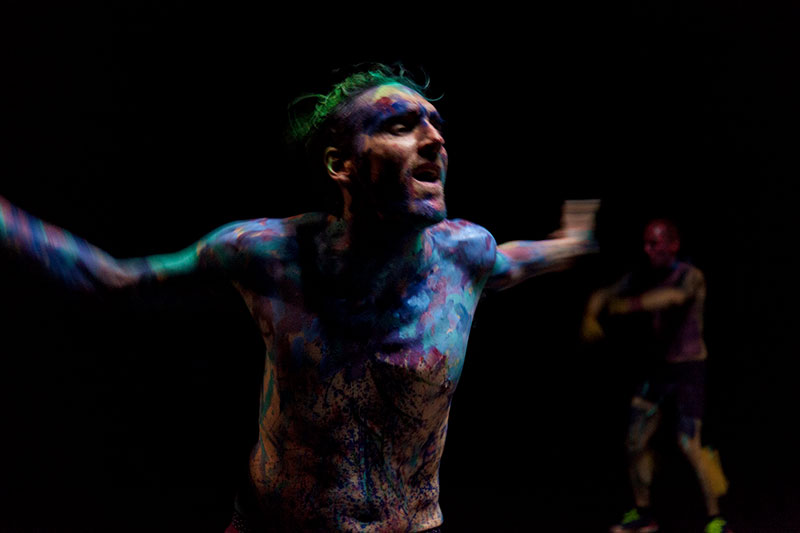 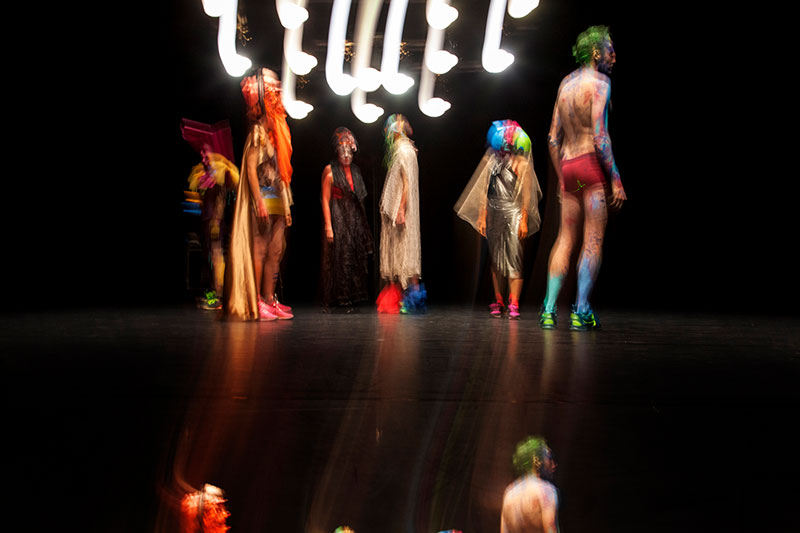 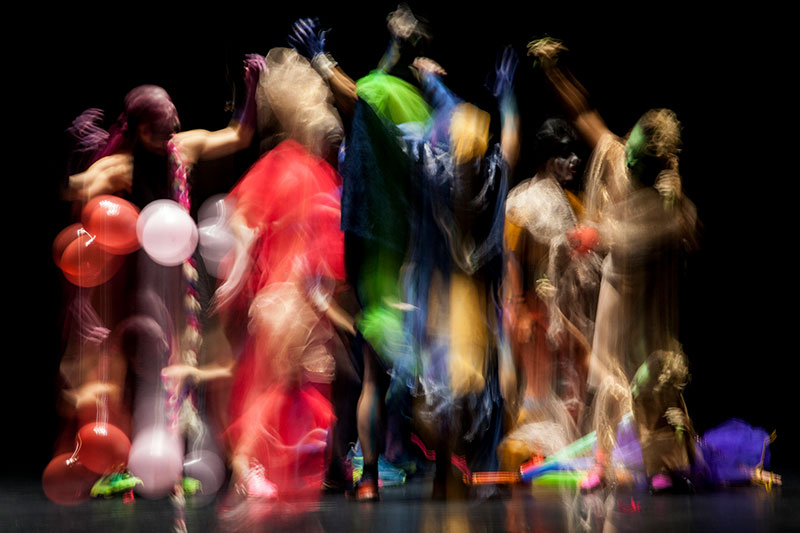 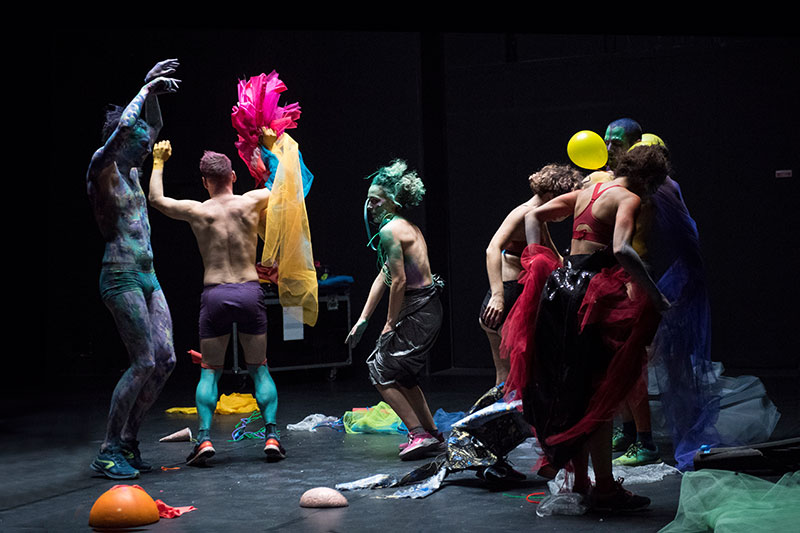 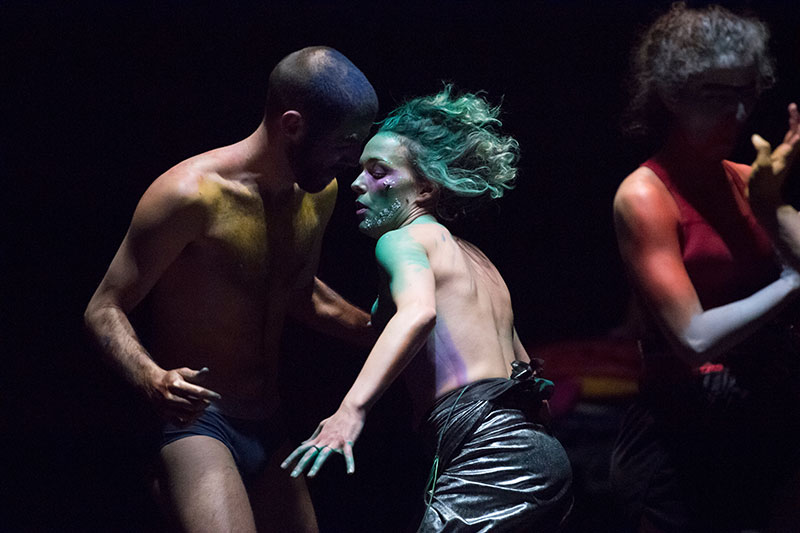 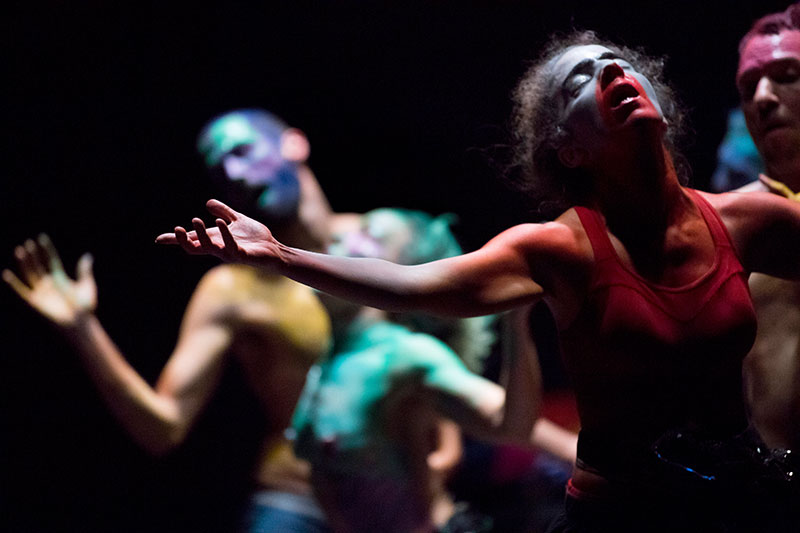 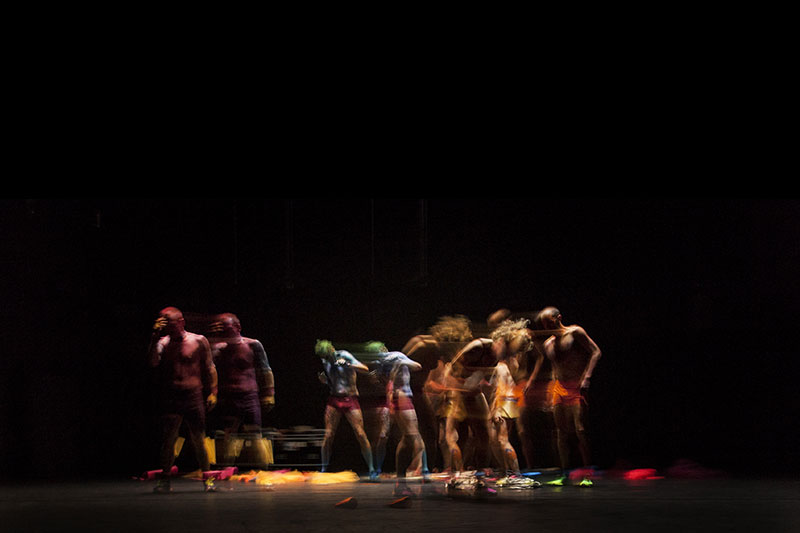 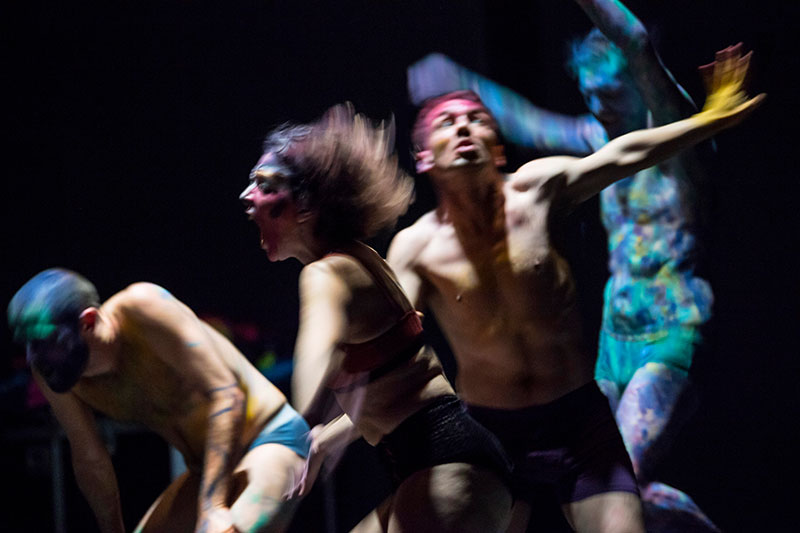 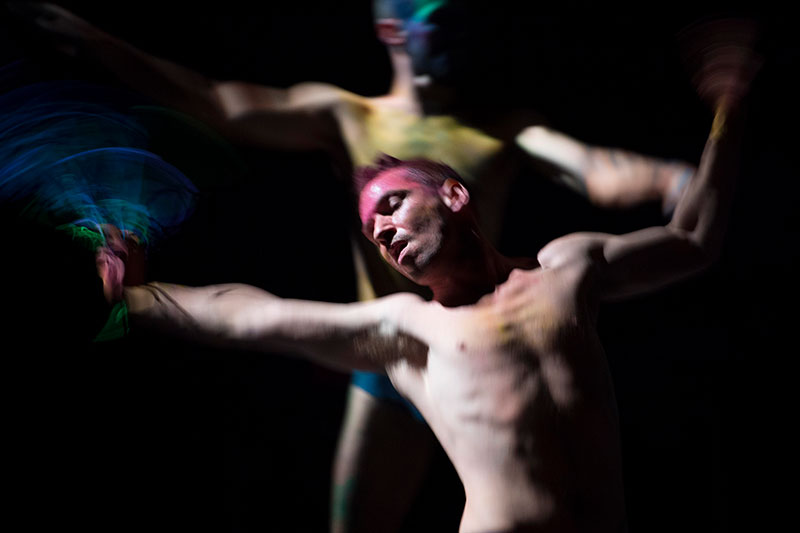 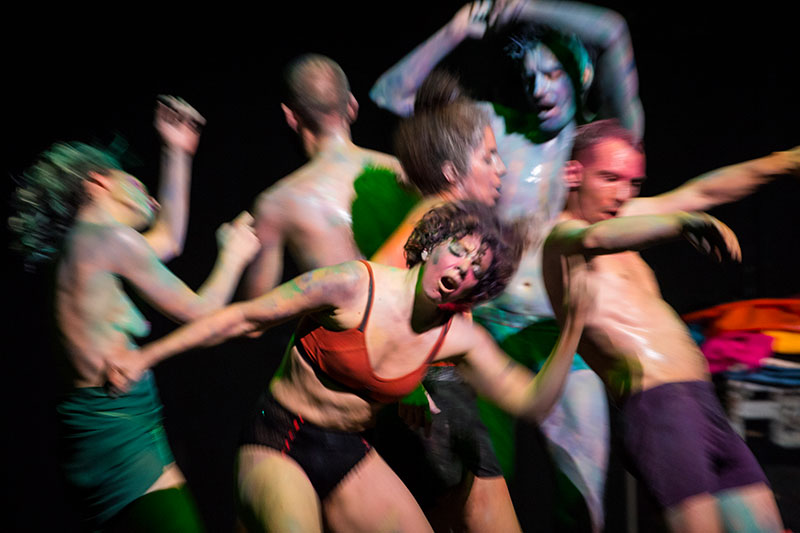 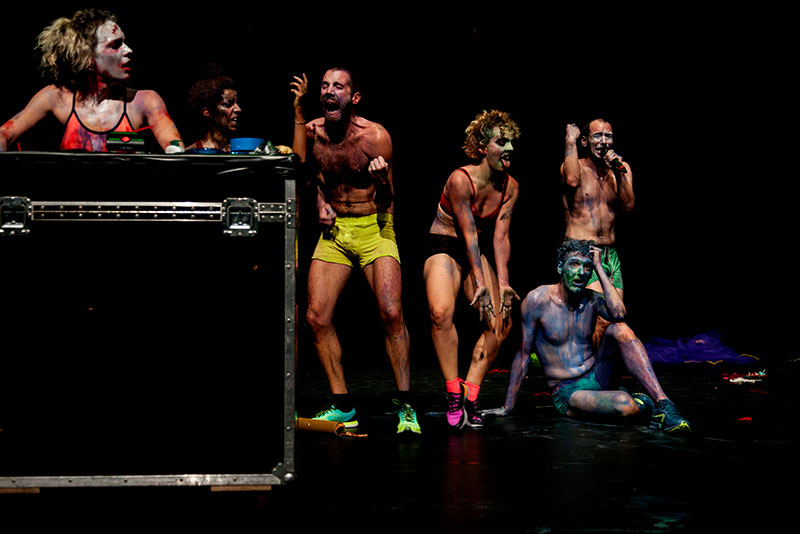 2019 creation
Duration : 1h15
Piece for six dancers
« My goal is for the audience member to wonder: what is my own outlet? And what place do I leave it? I’m interested in the response of the body because I’m a choreographer, but it’s not an ultimate response in and of itself. (…)
I had a visceral desire to create my utopian, outrageous party, my dream show: friendly, free and unifying. »
Arthur Perole, February 2019.
Considering the theater as a space of physical and psychic freedom, Ballroom is rooted in Arthur Perole’s research on traditional and contemporary releasing dances, from voguing to tarantella, from farandole to the night-time pulses of techno. So many reasons for the emergence of a physical, eruptive dance, a dance of excess and outrageousness, of exertion and exhaustion, questioning the gathering strength of the group, of an exalted community.

More than ever, Ballroom involves the audience, imbues them with a physical vibration, a sensory excitement through its contagious energy, its surge of colors, make-ups and other props, through its ambient incantatory electro beats composed by Giani Caserotto…

Here, the provocation is not seen as a dogma, it is the result of an immeasurable and sincere joy in pushing away the walls, ignoring constraints, putting down all barriers of identity, category or gender.

Ballroom is a party, sometimes waning, sometimes dizzying; an indecent and jubilant celebration of the senses; a raved and raving trance: the dream of a space of regained freedom. 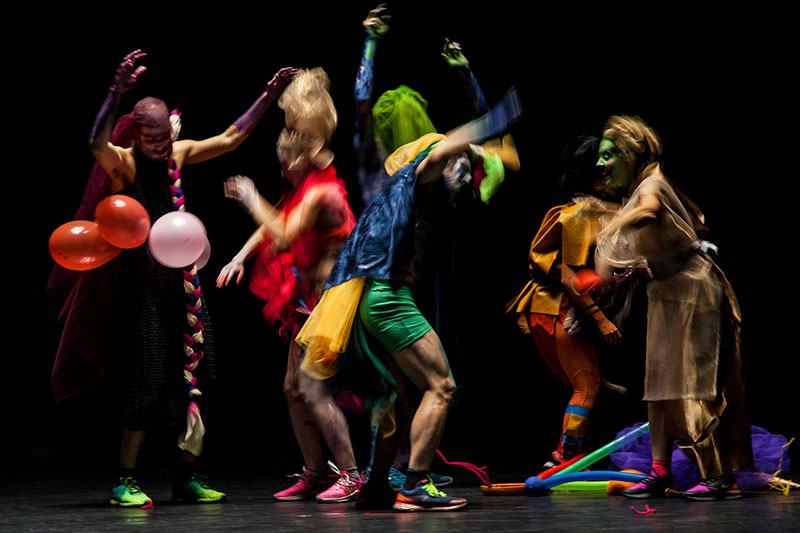 It is in subtleties, in the progression, in the transition from one bodily state to another that Arthur Perole and his talented performers best express themselves.

Arthur Perole signs a daring, colorful piece, carried by a wind of revolt in the atmosphere of a carnivalesque, thunderous zenith.

The energy is communicative, the audience stomps their feet, vibrates with the dancers, fascinated by the surge of colors, fiery gestures and released sensations.

Arthur Perole thus unravels the dances to create, with his team, a hymn to clubbing, in which the soundtrack is a journey, the journey of a trance where the god Clubbing communes with his followers. A communion that becomes an act of love.

Arthur Perole, a personality free from genre dictates, sets the date to figure among the most boisterous contemporary choreographers, daring so much to dare (sic), carried away by an authenticity and a generosity that nothing and no one seem to be able to curb. Six profusely made-up dancers, painted on sight and dressed up with the help of invited audience members, indulge in convulsive trances that will give birth to the freed subjects.